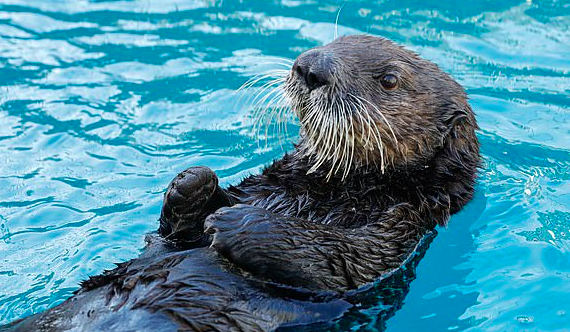 Sea otters often need rescuing after being stranded by their mothers when they are pups and they need maternal care or they will not survive. The center says the facility will replicate their natural habitat in the wild and give them a safe sanctuary for the rest of their lives. ‘It’s been a pioneering project for the country, taking global efforts and a collective vision with our conservation partners to protect the world’s oceans and the incredible marine life which lives within’ says Jonny Rudd, Curator at the National Sea Life Centre Birmingham.

‘Alaska’s wildlife is being displaced by a growing population and encroaching development, which results in injured and orphaned wild animals in need of assistance,’ said Keith Lange, Alaska Wildlife Rescue Founder. Otters were almost hunted to the brink of extinction for their thick pelt. Fortunately, sea otter numbers have increased but they are still listed as seriously endangered by the International Union for Conservation of Nature.

The species is now playing a role in marine education programs, including this partnership between the Sea Life Trust and Alaska Wildlife Rescue. ‘The sea otters arrival will be a landmark moment for the UK and give us a sense of connection to nature and wildlife from across the globe’, said Mr Rudd.

Humans are the biggest threat to sea otter populations according to the Sea Life Trust, which says rising water temperatures are leading to more viruses surviving longer, thus killing the species. ‘Direct conflict with humans, such as entrapment in fishing traps and nets pose a major threat to sea otters, but oil spills, other pollution, and loss of kelp forests are also threatening sea otters.’

Original Article: Pair of Alaskan sea otters will travel 5,000 miles to state-of-the-art enclosure at UK sea life centre as part of a mission to protect the critically endangered species