Alaska’s wildlife is being displaced by a growing population and encroaching development, which results in injured and orphaned wild animals in need of assistance. Alaska Wildlife Rescue is the voice for animals in need.

To rescue Alaskan wildlife from life threatening situations, to transport injured animals to veterinary and rehabilitation center throughout Alaska, to organize foster care for orphaned wild animals, to reintroduce previously injured and orphaned animals back into the wild and to educate children and adults about the value of Alaska’s native animals. 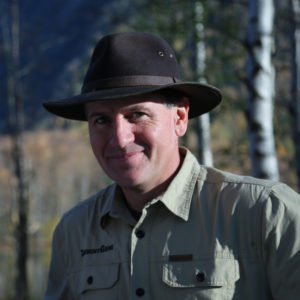 Keith Lange’s extensive background in wildlife rescue and rehabilitation comes from 23 years of managing a wildlife reserve in Merrill, Wisconsin (1982-2005). During this time, an abundance of wildlife was looked after and managed under rehabilitation permits. A few of the species cared for at the Reserve included larger game, such as black bear, numerous species of deer, and Roosevelt Elk. Additionally, there was also an abundance of smaller animals, which included porcupines, Red and Silver foxes, owls, and waterfowl. All animal- care was maintained by the local Veterinarian, Gary Egenbretson. Dr. Egenbretson assisted with immunizations, wound care, birthing complications, and any other medical condition in need of attention. Furthermore,  Keith graduated from the College of Natural Resources at the University of Wisconsin, Stevens Point. Upon graduation, he earned his degree in Wildlife Management and  Environmental Law Enforcement. Some of his additional experience includes working for the Wisconsin Department of Natural Resources as a Biologist and wildlife trapper. This skill was required for collaring wolves during the Timber Wolf recovery program of 1986. Keith is also the owner of Varmint Gone LLC, which specializes in no-kill and humane catch and release and he is a primary figure throughout wildlife control in Alaska, Wisconsin, and the Carolinas. 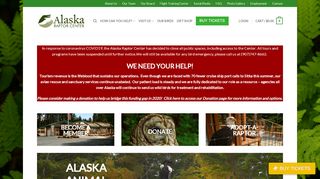 Each year, the Alaska Raptor Center provides medical treatment to 100- 200 injured bald eagles and other birds. Their goal is to release the patients back into the wild; some, however, are injured so severely they could not survive in the wild even after rehabilitation. These birds may join their Raptors-in-Residence, providing excitement and education for more than 36,000 annual visitors and for the 15,000 school children they reach through the Adopt-A-Raptor program and classroom presentations around the country. 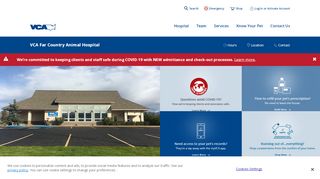 VCA Far Country Animal Hospital is proud to serve the Matanuska Susitna Valley and surrounding communities including Big Lake, Houston, Willow, Sutton, Glennallen, Eagle River and Chugiak, Alaska. Our trained staff is dedicated to providing the highest level of complete veterinary care along with friendly, compassionate service. A veterinarian is on duty 24 hours a day, 7 days a week, 365 days a year. 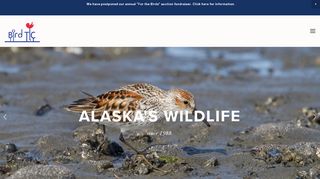 The Bird Treatment and Learning Center is a 501 (c) 3 nonprofit organization located in Anchorage, Alaska. Their mission is to present living science education that instills understanding and appreciation for wild birds and their habitats. In addition, they provided primary medical treatment, rehabilitative care, and potential release for sick and injured wild birds. 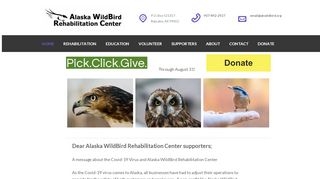 The mission of the Alaska WildBird Rehabilitation Center is to care for injured, orphaned, and sick wild birds with the goal of returning them to the wild; and to educate the public about these birds and their habitats. 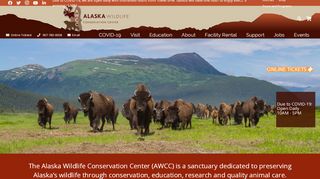 AWCC is a nonprofit organization dedicated to preserving Alaska’s wildlife through public education. AWCC takes in injured and orphaned animals year-round and provides spacious enclosures and quality animal care. Animals that cannot be released into the wild are given a permanent home at the center. 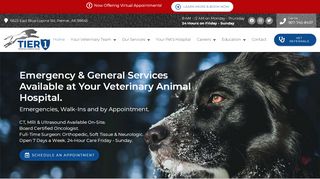 The emergency veterinary team at Tier 1 works around the clock to provide calming, nurturing emergency care. In the event of a severe medical emergency, they are equipped with the medical technologies and experience required to administer the most innovative and modern treatments available, including computed tomography (CT) scans and fluoroscopy, and orthopedic and soft tissue surgery.