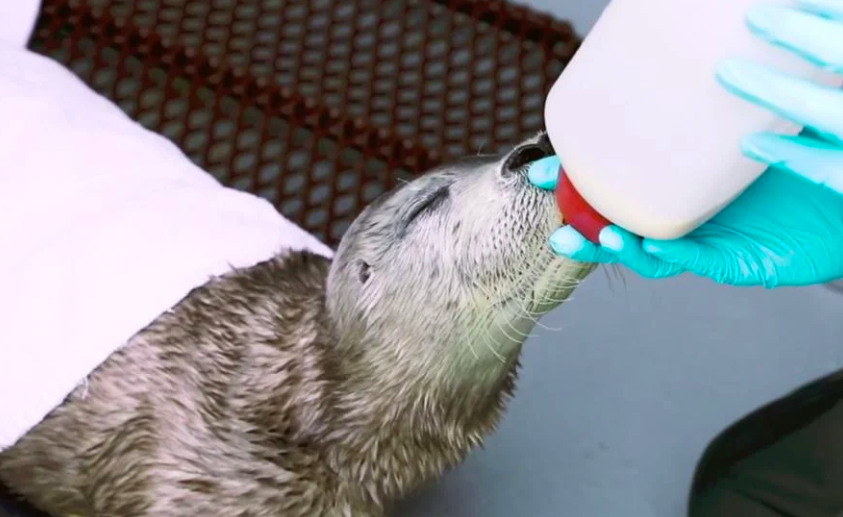 In May of 2019, a seal pup was brought back from the brink of death thanks to some wildlife caretakers in Alaska. An Alaskan Bearded Seal rescue is not always an easy task, however. Continue reading to learn some obstacles caretakers faced and learned to overcome in this amazing baby seal rescue…

The SeaLife Center stated that some school children protected the seal from other humans and animals. Although Ice seals are hunted by some villages in Alaska, the noticed the children’s attachment to their new friend and decided to call the SeaLife Center for help.

The center’s mission was to nurse the seal back to health. A bearded pup gains three times its weight after birth from eating its mother’s high-fat milk. However, the center explained that helping a malnourished pup gain weight isn’t an easy feat.

Wildlife Response Curator Jane Belovarac stated that “If you feed too much fat to a starving animal too quickly it can be harmful. We have to take her weight gain slow to make sure her body can process the nutrients.”

The female pup’s weight wasn’t the only challenge for the staff. Because of her low weight, the seal had trouble regulating her body temperature, especially when swimming. In saying so, staff member are also helping her build up her blubber layer with feedings every few hours.

The National Oceanic and Atmospheric Administration gave the SeaLife Center permission to take in the sick bearded seal pup and she will stay in captivity for the rest of her life. Bearded seals, along with other seal species cannot be released back into the wild because of the National Marine Fisheries Service policy on the Alaskan ice seal species.

On April 13 we admitted a one-week-old bearded seal pup into our Wildlife Response Program. The last time ASLC responded to a bearded seal in distress was 2002. The female pup was observed on the shores of Shaktoolik by local residents and transported to the Center. She arrived severely underweight and staff are now working to increase her blubber layer. Stay tuned for updates!

Posted by Alaska SeaLife Center on Wednesday, May 8, 2019