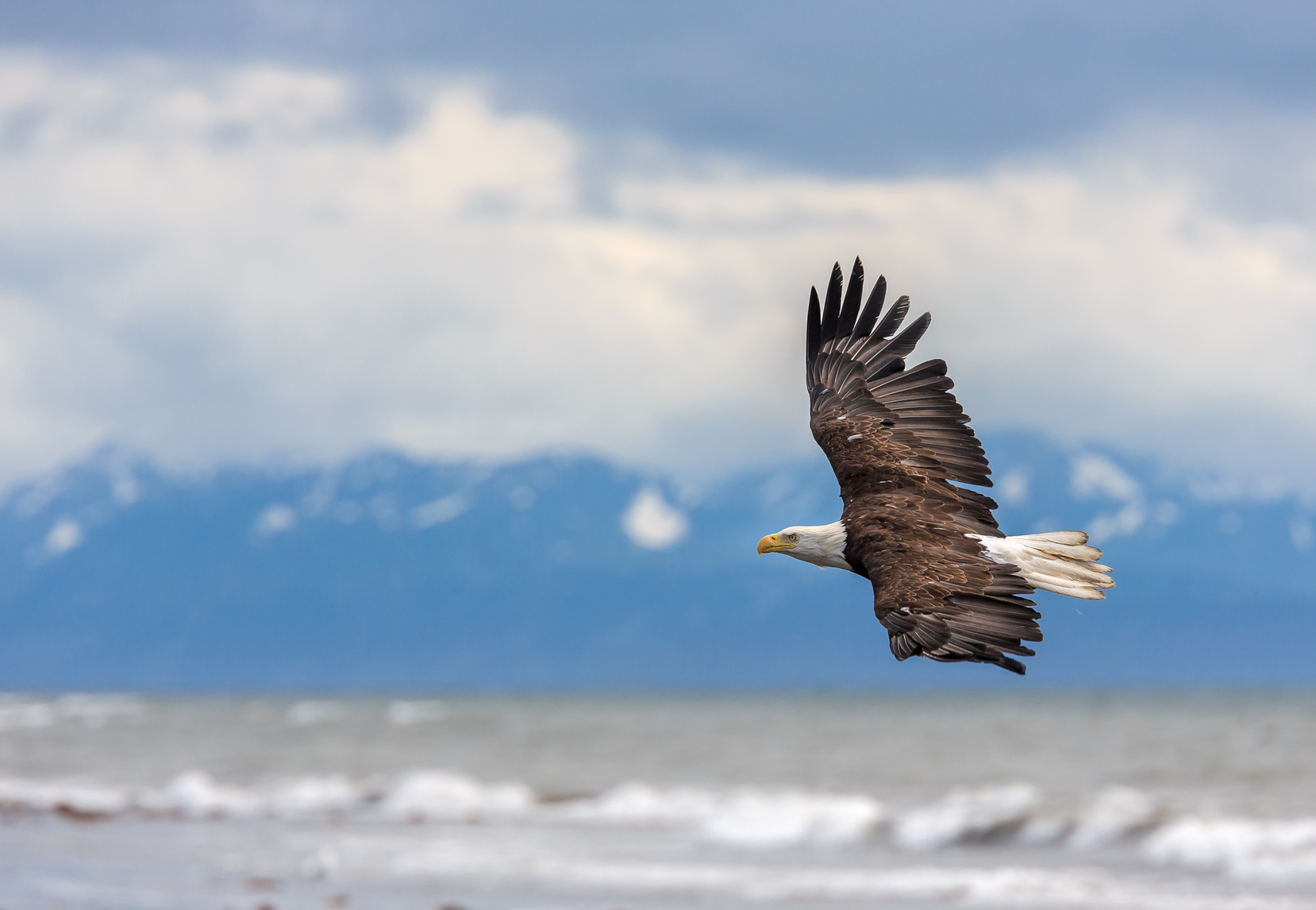 Often regarded as one of the most spectacular sights in the sky, ruling a terrain that is available to only a select amount of this planet Earth’s creatures, the Alaskan Bald Eagle is feared and prominent predator. Below certain facets of this magnificent creature will be explored in an attempt to spread information and awareness to help in the rescue and conservation of the species.

The Alaskan bald eagle is a powerful totem in America, celebrated and revered well before the colonists approved the bird as the national emblem in 1782. This specific type of eagle, found exclusively in North America, for centuries was held sacred by Native Americans, who regarded it with significance in their culture long before the arrival of the Europeans. Eagles appear in many tribes’ creation stories, and they are respected because of their strength, boldness and courage to withstand any obstacles. “The eagle was given the power from above”, says Francis Mitchell, a Navajo medicine man. “Whatever was before it, it would conquer and not back off”.

Although not actually bald as their name would suggest, the Bald Eagle can be identified from the distinct white feathers that cover the entirety of their heads- which is how they were named as the old English word for “white headed” is “piebald”. The rest of the plumage of the eagle is evenly dark brown, and it takes 5 years for the pure white feathers to develop, so the youths can be identified with their mottled brown and white colour, and their black beaks as opposed to the adults which sport bright yellow beaks, feet, and irises. It is perhaps the size of the Alaskan Bald Eagle which makes it so spectacular, this bird builds the largest tree nest out of any animal ever recorded: up to 4m deep, 2.5 meters wide, and weighing about 1 metric tonne! This great feat is only achievable with these birds as they grow up to 2.5m in wingspan and weigh between 4.1kg-5.6kg, the females being around 25% bigger in size than the males.

These powerful predators use their talons to skim over the waters to fish, but they acquire the bulk of their meals by thieving the kills of other animals or scavenging rotting remains- this tactic of stealing what isn’t hunted by them famously prompted Benjamin Franklin to ironically argue against the birds nomination as the United States national symbol. Because of their mainly fish diet the eagle lives near water, preferring coasts and lakes where there are water dwellers in abundance, resulting in a natural migration to areas such as Alaska and Canada, where the Bald Eagle population is the most dense. 50,000 of the birds are found in Alaska alone where the highest nesting densities occur on the islands of southeast Alaska, here Bald Eagles usually nest along saltwater shorelines and mainland rivers. The rest live spread out across the coast, offshore islands, and interior lakes and rivers.

Similar to Penguins who mate for life, Bald Eagles also remain with the same partner unless one is to die then the survivor would seek out another mate. The mating ritual begins when the birds are sexually mature at 5 years of age, where the birds often return to the same place that they were born where they will find a tree for nesting- cottonwood, spruce, cedar, and hemlock being the preferred tree species. Once extraordinary structures of sticks and moss have been shaped into a nest, the Bald Eagles will wait for the months of March and April to lay and incubate their eggs, which there will be one to three of.

As with most of mother natures creations, the biggest threat to the survival of the Bald Eagle is the carelessness and murderous appetites of human beings. There was a time in the mid 20th century where the mighty Bald Eagle was almost rendered extinct, with numbers of mating pairs dropping from 300,000- 500,000 to an estimated 412 by the 1950’s. Contaminants such as DDT, lead and oil are the reason for may of these deaths, DDT being a toxic compound that was leaked into the water after World War 2 to control the number of mosquitoes but unfortunately accumulated in the bodies of larger organisms resulting in death. In 1930 a New York City ornithologist wrote that in the state of Alaska in the previous 12 years approximately 70,000 bald eagles had been shot. Many of the hunters killed the bald eagles under the long-held beliefs that bald eagles grabbed young lambs and even children with their talons, yet the birds were innocent of most of these alleged acts.

Eagle numbers have since then rebounded significantly thanks to its protection under they had been delisted from species included as part of endangered and threatened wildlife in the United States. Though this species is far from in the red at this current time, places such as the Alaska Raptor Centre continue conservation efforts with rescues and giving treatment to over 100 Bald Eagles per year.