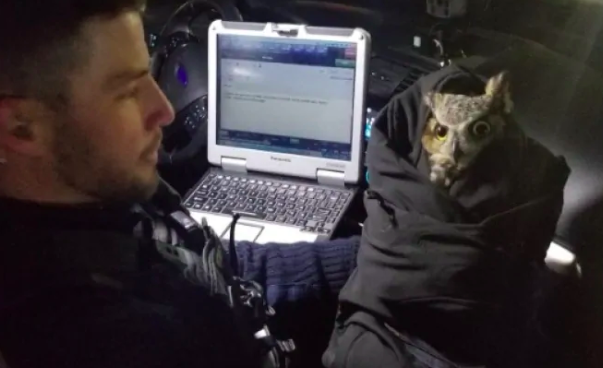 Performing an owl rescue can be tedious and nerve-racking. These large birds have sharp beaks and powerful talons that can grown up to 3 inches long! In saying so, rescuers have to be careful when handling an owl to make sure they do not injure the bird or themselves!

In this owl rescue, Regina police found a full grown female great horned owl trapped in a soccer net, who was “very fiesty.” Const. Jon Cooper was just the person for the job. On top of being a police officer, Cooper is an experienced falconer. When he and his partner arrived on the scene, the giant bird of prey was badly tangled up in the net. It took Cooper and his partner about 10 minutes to free the bird. Once it was released they noticed the bird was unable to fly. Cooper caught the owl, swaddled it in a blanket and decided to take it home with him.

Later that day, Cooper connected with Salthaven Wildlife and Education Centre in Regina so they could takeover care of the bird. After closer inspection, caretakers noticed some swelling in the owl’s joints from trying to free herself from the soccer net. After seeing a veterinarian for treatment and once the swelling goes down and she is able to fly again, the owl will be released back into the wild.

As for Cooper, he said “being a police officer is about helping anyone in need, even those with feathers!”