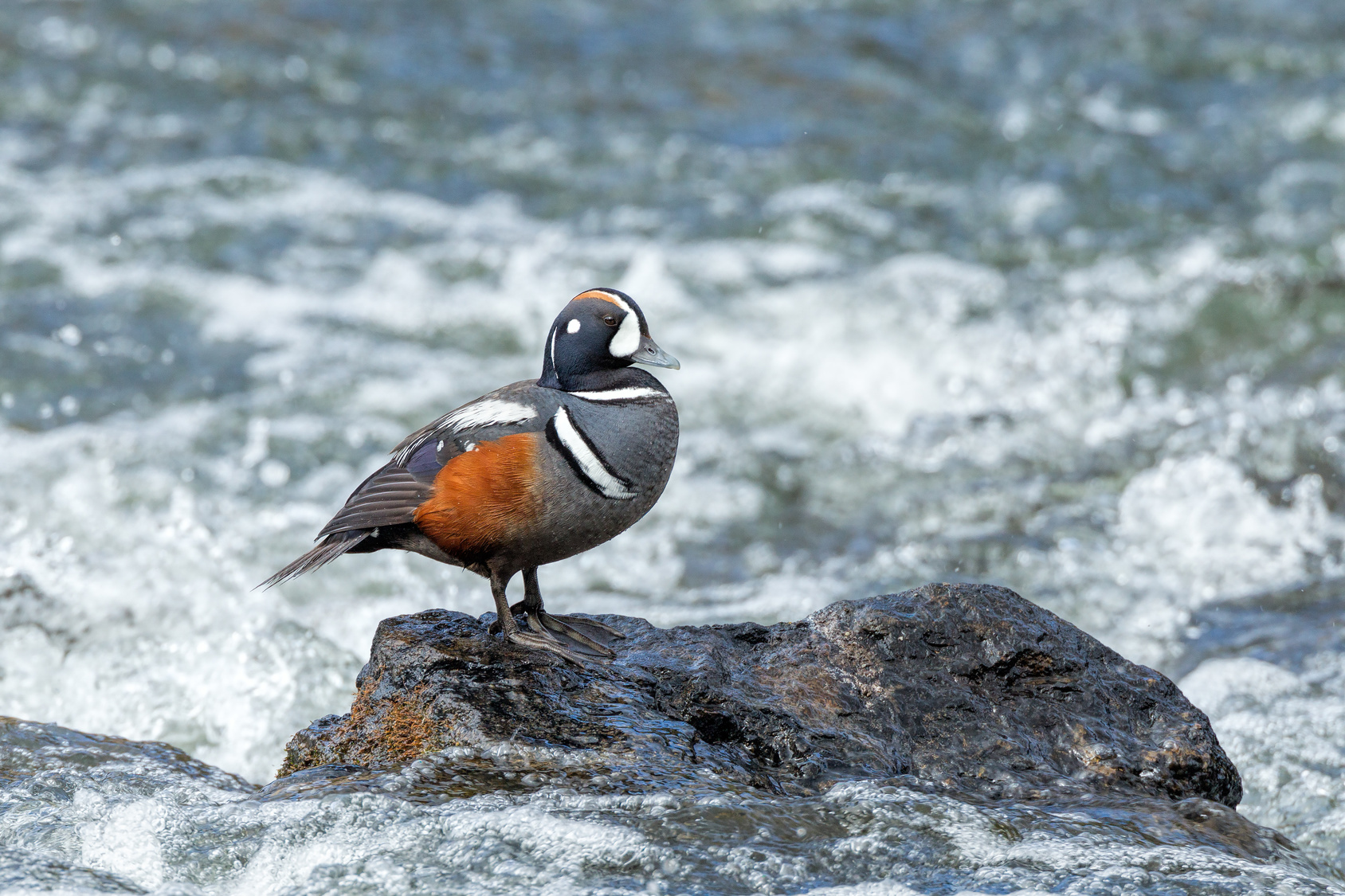 The Harlequin Duck, aptly named for it’s vibrant appearance reminiscent of medieval court jesters can be identified by it bright plumage of blue-gray feathers with distinct black, white, and rufous markings on the head, neck, back, and sides. Though the adult females are identified by being less colourful, with brownish-grey plumage with three white patches on the head- they can also be characterised by their mouse like squeak that has earned them the nickname of “sea mice”.

Small in size, but thrill seeking in their nature, turbulent northern waters are favoured by this strikingly patterned little duck. It is often found in summer on rushing rivers, diving and swimming against the current, climbing easily on steep and slippery rocks above the water. Worldwide, harlequin ducks are divided into two distinct populations — a larger western or Pacific population and a much smaller eastern or Atlantic population. The Pacific population is found most part in Alaska due to its favourable conditions for these birds, here they can easily seek out additional sites to feed in the swirling waters of shallow and rocky coastal areas. In northern wintering areas, they seek rocky shores and ledges near turbulent water where ice buildup is minimal. However, in spring they leave the salt water to ascend fast-flowing rivers and streams to breed.

The average lifespan of the Harlequin duck is between 12 and 14 years, meaning that a once a year breeding interval will ensure a sizeable amount of offspring for these waterfowl that reach sexual maturity at 2 years. These seasonally monogynous birds find a single partner for the mating season which happens in May and June and in this period a single female duck will lay between 5 to 8 eggs, which will then hatch after 28 days of incubation- the same time as a human female’s single mensturation cycle! Harlequin ducks choose their mates beginning around October based upon a mating ritual where the males will perform courtship dances, shake their heads and tails while making a whistling noise to attract a female.

The Harlequin Duck has high food energy requirements, probably because of its relatively small body mass and high metabolic demands, especially in colder parts of its range which means they must feed continually to maintain their metabolism. Foraging by swimming underwater or by diving and walking on the bottom; also by dabbling at surface or up-ending in shallow water, these ducks will sustain themselves predominately on a diet of mollusks, crustaceans, insects.

Though this species isn’t currently on any conservation list in North America, that doesn’t mean that their numbers don’t face threats. The  most common of these, as with most beings in the animal kingdom, are the problems that humans bring upon their habitat- as an example the Harlequin Duck population in Alaska is still exhibiting reduced survival rates due to an oil spill that occurred in 1998! These ducks are highly susceptible to oil spills, as they spend most of their time in the water, and high mortality has resulted from this. Other threats also include logging, mining, dams, and hunting- although it is now illegal to hunt Harlequin Ducks in the Atlantic Provinces, Ontario, Quebec, and in the eastern United States.

Due to the high concentration of Harlequin Duck numbers existing in Alaska, there are establishments in place, like Alaska Wildlife Rescue to ensure that the continual rescue and rehabilitation of these birds exists. Here they will have a number of these ducks coming into their care each year.